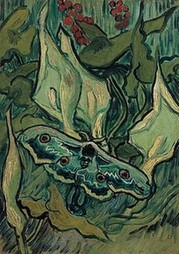 Vincent van Gogh painted almost 900 paintings from 1881 to 1890. The butterflies and moth series were produced between 1889 and 1890. In this series, there is one painting of a moth, "The Great Peacock Moth", and at least four butterfly paintings: "Poppies and Butterflies", "Two White Butterflies", "Grass and Butterflies", and "Tall Grass with Butterflies" . These paintings were done while van Gogh was in the asylum in Saint-Rémy-de-Provence. They are now located in the Van Gogh Museum in Amsterdam for everyone to see.

Van Gogh was mentally unstable. While in the asylum, he was restricted to working on only the asylum grounds. He painted the things that he saw in the abandoned, overgrown gardens. He examined the flowers and grass; he was very intimate with nature. His last few years are known to be his most productive. One day in the asylum, Van Gogh found a moth in the garden, it was large and of wonderful colors. But in order to paint it, he had to kill it. Thus, "The Great Peacock Moth" was created.

Van Gogh did this series of paintings on butterflies and one moth to symbolize the capability of transformation of humans, as a caterpillar transforms into a butterfly or a moth. Through transformation brings hope, and this is the message van Gogh is portraying. One of his favorite metaphors was about the possibilities that transformations can bring. He was intrigued by the idea of metamorphosis. The caterpillar is not as pleasing to the eye to most people. But it has the ability to go through metamorphosis and transform into a majestic butterfly or a great peacock moth. Van Gogh was attracted to women in trouble because he thought that he could help them. He involved himself with prostitutes. He also had hope for them, for they were also capable of transforming into what they wanted to be.